One of a pair of ferries built at Verolme Cork Dockyards. Her sister being, at the time, the largest ferry to fly the Irish flag. 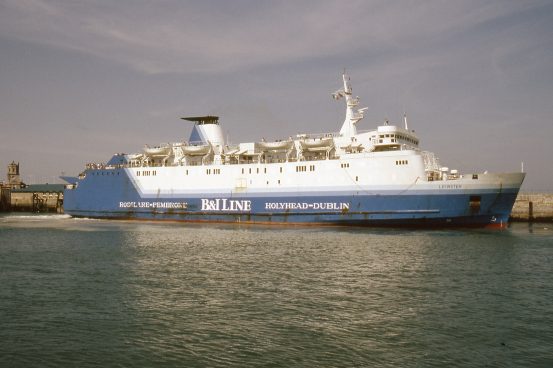 May 3rd 1993: Services between Rosslare – Pembroke.

October 24th 1995: In severe weather collided with the quay in Rosslare. Went to Falmouth for repairs.

2006: Rebuilt to comply with the latest safety regulations. This included the addition of large sponsons to the stern

August 29th 2019: Mechanical failure occurred on one of her four engines. Since another engine was already out of service, she continued sailing on two engines, which had an impact on her service speed (went from 17 to 12 knots). She had to be stopped for a few hours while repairs took place.

October 28th 2019: Whilst moored at Cap-Aux-Meules reported a crack/failure in the opening and closing system of her bow visor.

November 4th 2019: Returned to to the port of Cap-Aux-Meules for repairs.

January 31st 2021: Laid up in Cap-Aux-Meules pending the result of Transport Canada’s call for tenders for demolition.

May 11th 2021: Arrived Sydney to be dismantled by the Canadian company Marine Recycling Corp.

All information is believed to be correct and no responsibility is accepted for any errors or omissions. All items included in this article are subject to © copyright. We would like to take this opportunity of thanking: Robbie Cox, Bernd Crause, Aubrey Dale, Mike Griffiths, John Hendy, Yvon Maurice, Don Merritt, Christian T and Andreas Wörteler for their assistance in producing this feature.

MV Thomas Wehr - Past and Present

MV Nikolay Kopernik - Cargo from the Past

MV Green Chile – Past and Present

MV Le Champlain – Past and Present

MV Arcadian – Cargo from the Past

DHB Lady Savile – Past and Present

MV Drotten – Past and Present

Christmas Past at the Port of Dover

MV Scandinavica – Past and Present