Steel twin screw motor vessel, built by Swan, Hunter & Tyne Shipbuilders (Yard No.10) at their Wallsend-on-Tyne yard for the British Railways Board in 1969 as a multi-purpose passenger and roll-on roll-off ferry for cars, lorries and railway vehicles

Vortigern – “Fitting Out” at Wallsend, Courtesy of Jim Ashby

July 9th 1969: Sea trials. As designed, she did not fit any of the local ramps and became the first ferry fitted with a “cow catcher”. This modification was fitted to her bows by Dover Engineering Department.

July 18th 1969: Delivered to British Railways Board as their first diesel-driven vessel in the Dover Strait. Also the first at Dover to have a bow visor and be fitted with variable-pitch propellers.

July 26th 1969: Arrived at Dover. She replaced the car ferry DOVER, which in turn was transferred to the Holyhead to Dun Laoghaire route.

July 31st 1969: Commenced regular summer service, with the 16.00 sailing to Boulogne. The vessel could function either as a conventional train ferry between Dover and Dunkirk, or as a car ferry to and from Boulogne, and she was generally used for the former service in the winter months and for the latter in the summer seasons. One main deck held road and rail vehicles and two auxiliary decks carried cars. In her early career she suffered from blowing cylinder head joints a problem which was later rectified by Pielstick.

September 18th 1969: Made her inaugural run to Dunkirk as a train ferry.

October 6th 1969: Commenced winter “Night Ferry” schedule between Dover – Dunkerque, the first new ship to do so for 18 years.

June 1970: Whilst en-route to Boulogne, struck an unidentified submerged object in the Channel. The port propeller was badly damaged necessitating its removal to Norway. The vessel resumed  to  limited service without passengers until returning to dry dock at Southampton for the propeller to be refitted. The third pair of lifeboats was replaced by a deck of life rafts.

“At the time nothing unusual was observed although some reported an unusual noise but no effects were noted on the engine or steering performance. However soon after she started maneuvering into the berth the low-level alarm on the port side hydraulic oil tank operated and soon all the contents were lost. This was the first indication that the propeller had sustained any damage.

The ship returned to Dover on one engine with no cars or passengers. I was the Chief engineer of the next crew joining the ship and received a phone call to be prepared to take the ship to dry dock in Southampton to carry out an inspection and any repairs that would be required. At this time no one had any idea as to what damage had been sustained.

On examination of the port propeller there was some obvious damage to two blades and on removing these it was obvious that the main damage was internal within the hub and the whole whole hub and the remaining two blades would have to be removed and returned to the makers for repairs. The only other evidence that there was that the ship had struck a submerged object was a score along the bottom about 70mm wide that scrapped the anti fouling through to bare metal. It was later unsubstantiated report that a French fishing boat had been lost in the vicinity and there was the possibility that she was still partly submerged and riding vertically on the air pocket in the fore peak. Other than the suggestion by a RN Officer that it was a Russian sneaking up the Channel no one has come up with an explanation.

The tail shaft was internally withdrawn and made fast and a blanking plate fitted so that the vessel could return to a freight only service until the propeller was refitted.

On returning to Dover from the original docking I left the ship as I had been on a month’s notice to leave the company and depart for New Zealand and join the NZ Marine Department as a surveyor.”

1970: Damaged her stern at the French port and was off service from October 22nd to 29th.

May 22nd 1971: Chartered to for an International Railway Congress in London, making a short trip between Southend Pier – Greenwich.

July 1st 1972: Made her first appearance at Folkestone.

1975: Saw her fitted with the first radar with an automatic plotting aid. 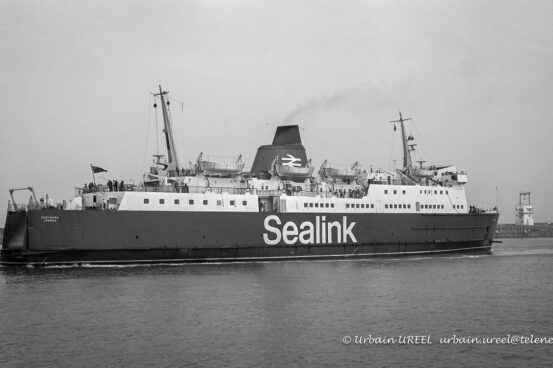 1978: Annual refit at Middlesbrough included the £200,000 conversion of her after boat deck garage (in use when the ship operated as a train ferry) to a passenger lounge. The ship’s passenger certificate was raised from 1,000 to 1,350. Her “A” deck garage space (capable of carrying 40 cars mainly when the ship acts as a train ferry) has been converted into a new passenger lounge with 342 seats. This reflected her more usual passenger-car ferry role these days and her certificate has been “upped” to 1,350 passengers with car capacity down to 200. Other, minor changes took place — the main one probably being the modification of her hull belting to allow a better fit at Folkestone.

October 28th 1979: Sailed for dry-docking at Holyhead and it was understood that officials at the Welsh port were anxious to put her on the Dun Laoghaire run in place of the failed ST COLUMBA but Dover protested and the spare MAID OF KENT was called in from Weymouth.

October 29th 1979: Arrived at Holyhead at 22.00 hrs and entered the dry dock on November 6th after the AVALON had vacated it.

January 16th 1981: Suffered an engine-room fire, resulting in much damage to her electrical installation. Repairs at Wallsend took four weeks.

June 1981: Grounded when going astern out of Boulogne.

March 6th 1982: Cleared the obstruction (10.39 hrs) with the aid of tugs and proceeded into Ostend (No.3) for discharge of vehicles, then on to lay-by (deep water quay) awaiting entry into the floating Dry Dock (occupied by PRINCE LAURENT on overhaul) for inspection.

March 12th 1982: Entered the Dry Dock for survey subsequently re-floating and sailing to Amsterdam for repairs.

July 3rd 1982: While operating 20.10 Calais/Folkestone service the vessel struck the pier at Folkestone, damaging her Port Quarter. She was despatched to Zeiglen Yard at Dunkirk Dry Dock 4 th July 1982, returning to service after repair, to Folkestone 15.00 10th July. (British Railways Board , Shipping Services).

1983: Relief ship Dover – Calais covering for the COMPIEGNE and the ST ELOI

March 1986: With the delays of the refit to ST CHRISTOPHER the VORTIGERN was back on the Dover-Calais service. During October, plans were drawn up to jumboise the ST ANSELM and ST CHRISTOPHER by inserting either a 50 ft. or 100 ft. section amidships and in the same month again saw the VORTIGERN on the route.

November 12th 1986: Arrested by the Admiralty Marshall on behalf of the National Union of Seamen over unpaid redundancy cheques at Portsmouth.

November 13th 1986: Released when the cheques were promptly issued.

November 17th 1986: Due to finish service in the Straits but was later about to be transferred to Weymouth. As it was she remained in the Dover Strait to cover winter refits of the HENGIST and HORSA.

January 10th 1987: Called to operate the Fishguard – Rosslare route while the ST BRENDAN was on overhaul before completing her service on 4th February (1987), then returned to Dover to lay up.

April 1st 1987: Following the tragedy off Zeebrugge, Townsend Thoresen chartered the vessel for £250,000 over a period of 60 days for use on their Dover-Boulogne link.

January 1988: Suffered a bow door defect and continued as a stern loader only until the fault was rectified.

January 31st 1988: Suffered a bow thrust fault and was unable to enter Folkestone in a SW gale and diverted to Dover where she is thought to have been the first ferry to use the new Number One link-span on the Eastern Arm.

March 7th 1988: Having been laid-up at Chatham re-activated on the Dun Laoghaire freight service.

March 10th 1988: Ended her career on the inward bound Dun Laoghaire sailing before sailing to Holyhead in ballast.

April 1988: Arrived at Gibraltar for Bunkers.

September 2004: Sold to Indian breakers for scrapping in October.

MV Darnia - Past and Present

MV Seafrance Cezanne - Past and Present

MV Dextrous – Past and Present

MV Swedica Hav – Past and Present

MV Ocean Endeavour – Past and Present

MV Aasfjord – Past and Present

MV Volendam – Past and Present

MV Viking 1 – Past and Present

MV Diligent – Past and Present

MV Royal Daffodil – Past and Present