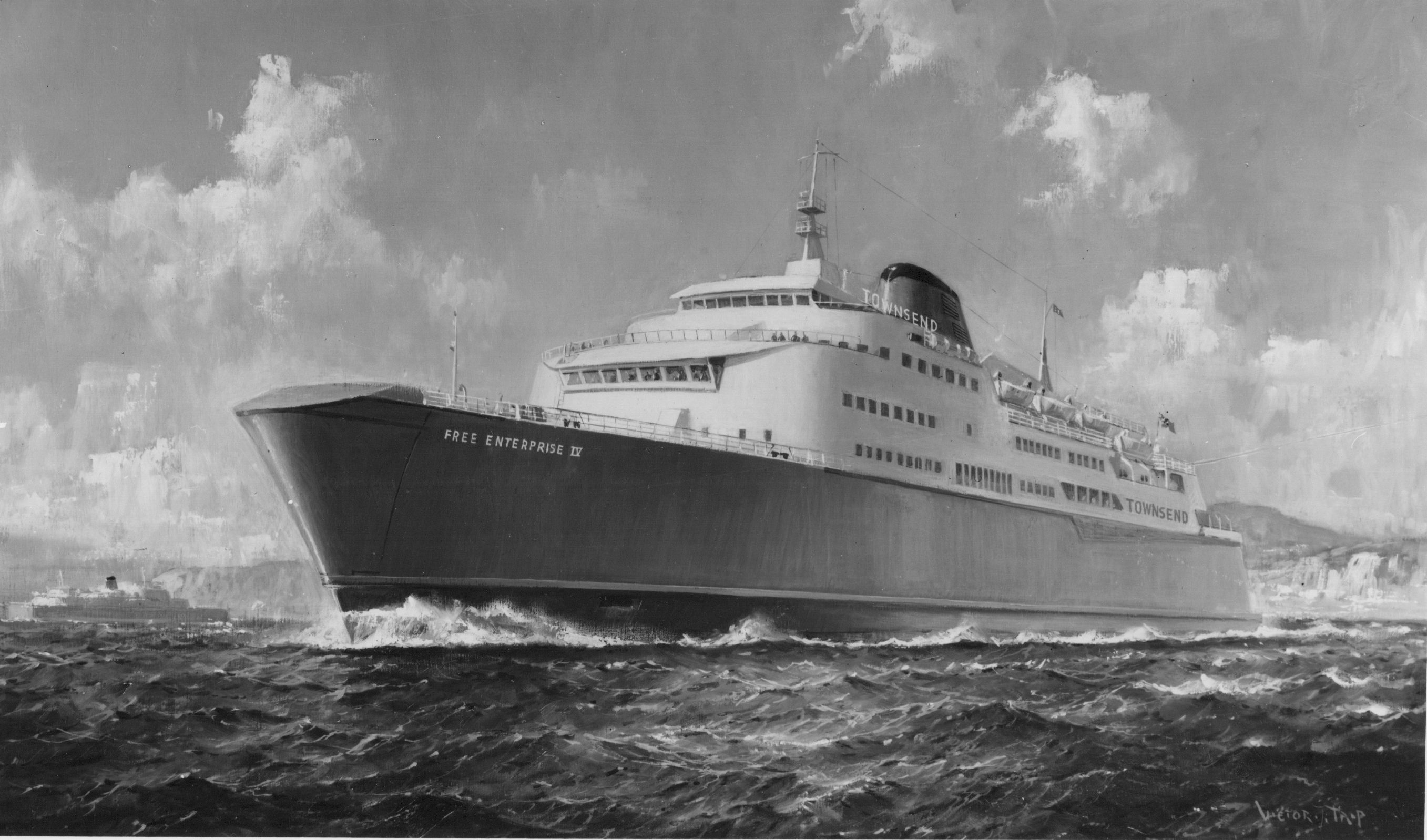 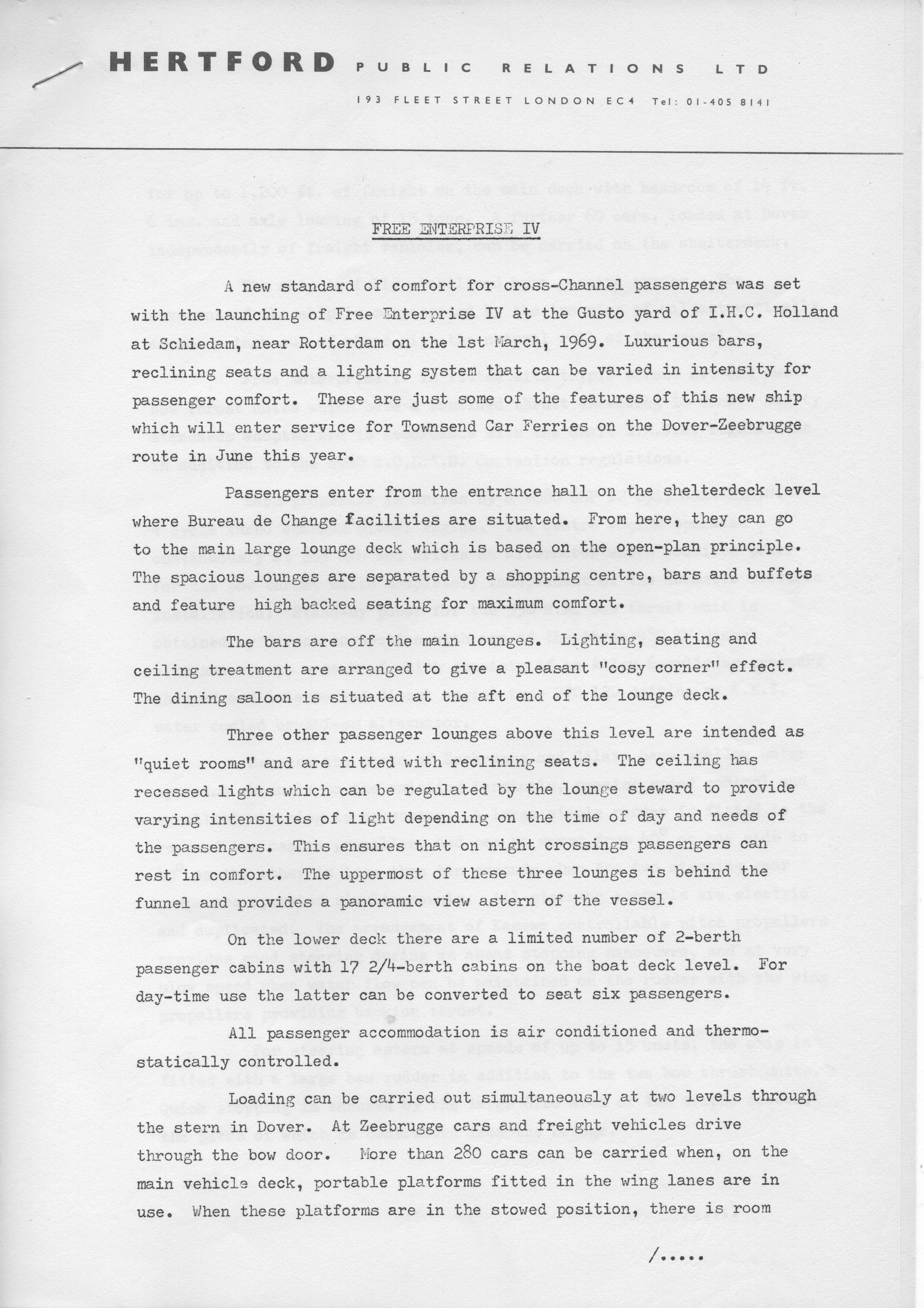 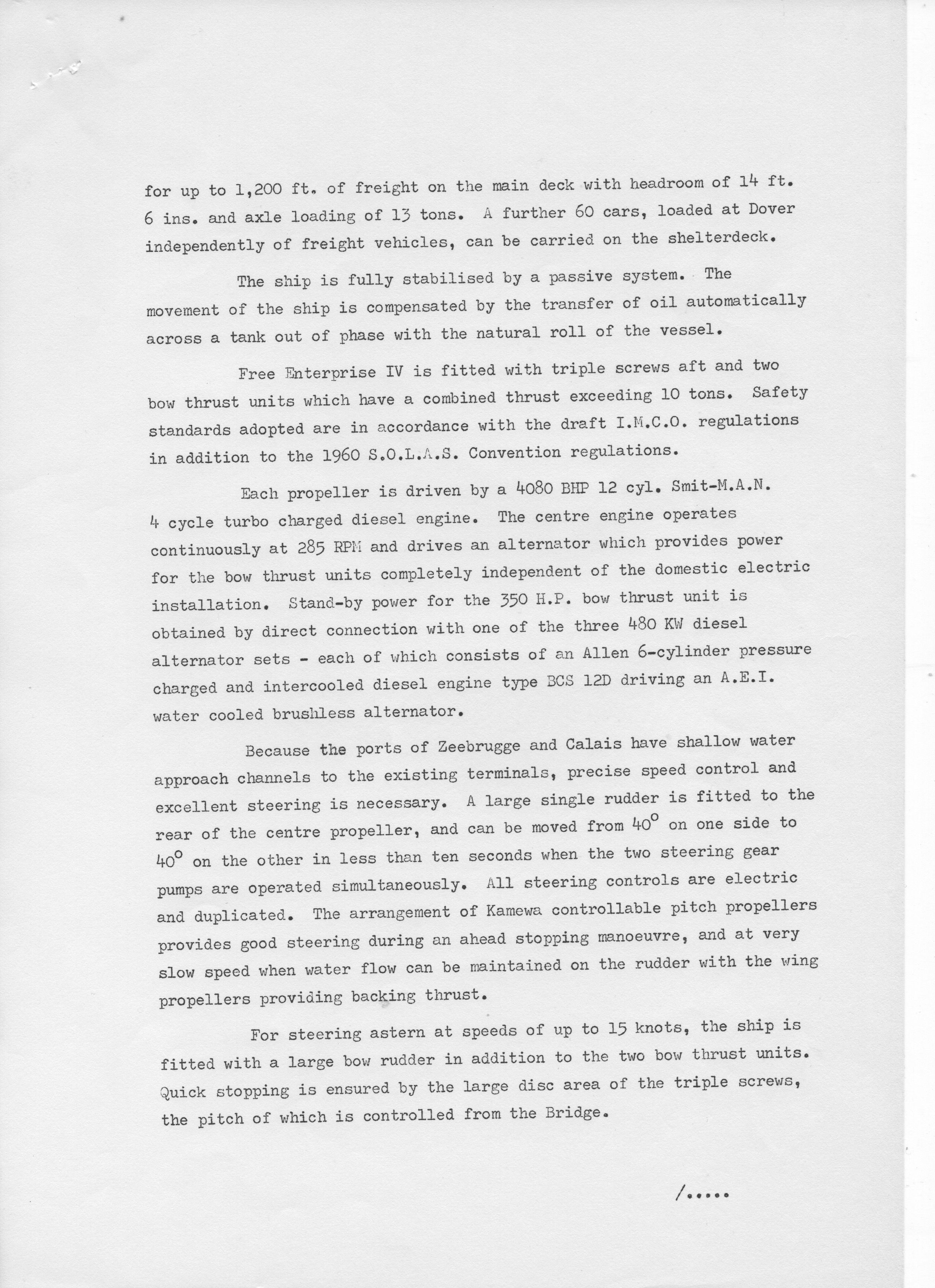 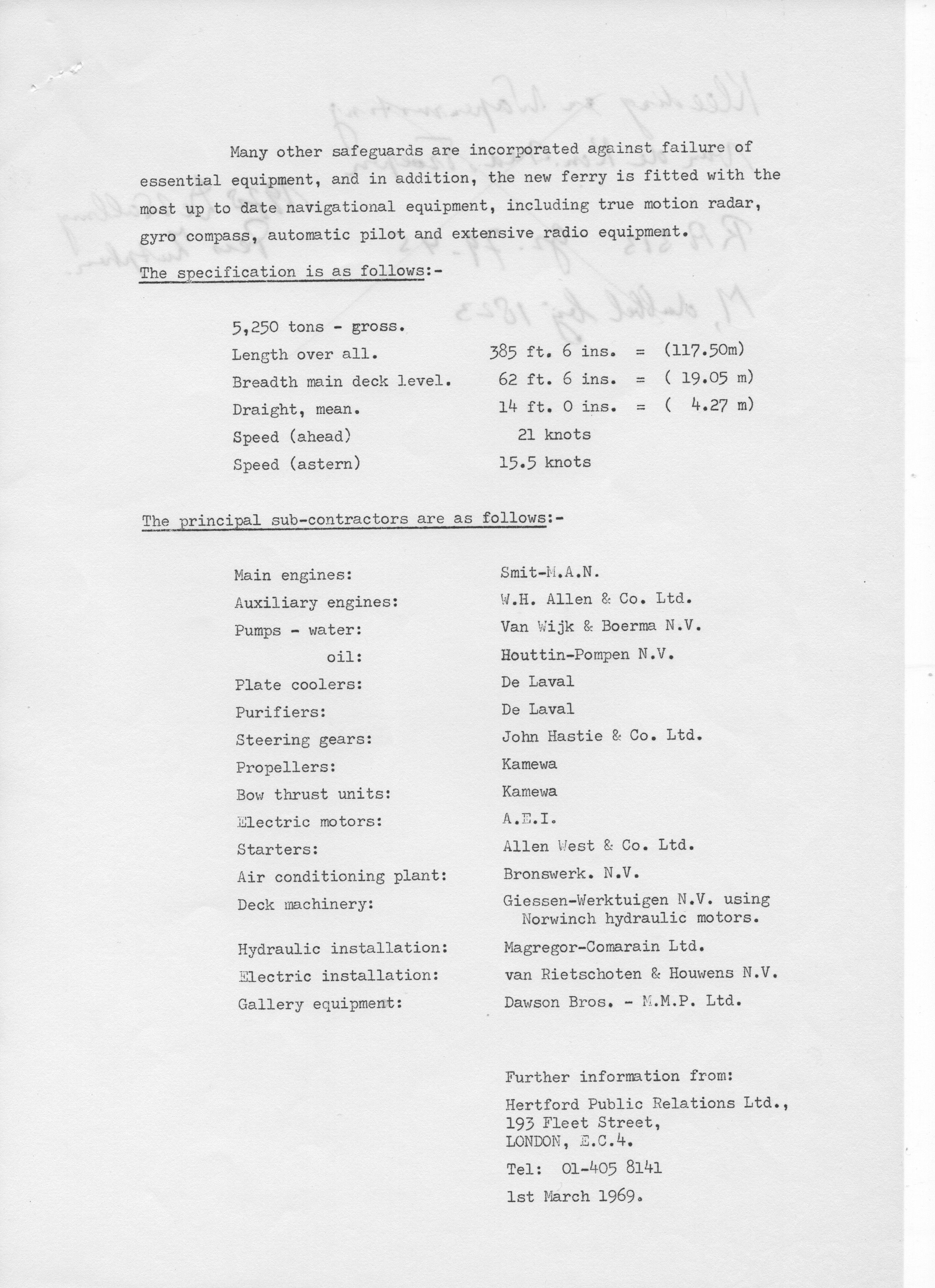 June 1st 1969: Made her maiden voyage to Zeebrugge. Then operated between Dover – Calais, Dover – Zeebrugge and Dover – Boulogne.

1972: Townsend Thoresen” was added in small white letters on the hulls and TTF logo appeared on funnels in pale green.

May 1976: Introduced between Cairnryan – Larne. She was just as successful in Larne as she was in Dover and quickly became the lead ship on the Larne to Cairnryan route throughout both winter and summer. Nicknamed FE IV she established herself on the route and became very popular with the travelling public. Her main problem was in the winter, her ballast tanks were nowhere near as effective as the fin stabilisers which were standard on the rival ships sailing to Stranraer and consequently she lost sailings while the Stranraer vessels sailed on.

February 1983 – March 1983 (mid): For six weeks after refit at North Shields arrived at Felixstowe covering for the absence of VIKING VOYAGER and VIKING VISCOUNT. This was her first spell at Felixstowe. In 1984 a new TT logo, in white, was introduced on funnels.

August 3rd 1986: Entered service on the Dover to Boulogne. After a thorough refit to prepare her for the rigours of her new English Channel assignment she continued on the route.

1987: Following the “Herald” disaster, from spring onwards, a pale blue funnel with P&O logo was introduced.

December 5th 1987: Laid up in Chatham, awaiting sale. Her withdrawal was followed by strike action by P&O seafarers who rebelled at changes in manning levels.

April 1988: Rebuilt at City Yard, Landskrona. During her refit the trademark arrow head Free Enterprise bow visor was removed in favour of a landing craft type ramp and her two aftermost lifeboats on either side were removed and replaced with a stack of life rafts on the stern walk-round promenade deck.

1990: Original Smit MAN engine driving the centre propeller of the three failed and was replaced with a MaK 9M453 unit.

June 28th 1994: Suffered a fire on board. One person died as a result and she was laid up for repairs.

1996: Withdrawn from the route and laid up at Rostock for sale.

1997: Saw service on her old route between Rostock and Gedser, for Scandlines.

February 26th 1998: Sailed from Rostock to Port Said in Egypt and entered service as TAG AL SALAM ferrying pilgrims across the Red Sea (Port Safaga – Dubai). She joined her sister ship, the former FREE ENTERPRISE VI trading for Al Salam as the PRIDE OF AL SALAM 95.

All information is believed to be correct and no responsibility is accepted for any errors or omissions found. All items included in this article are subject to © copyright. We would like to take this opportunity of thanking: Philippe Brébant (Association Paquebots & Marine Marchande), Bernd Crause, Aubrey Dale, Brian Fisher, Robert Fournier, Tony Garner, Jean-Guy Hagelstein, Frank Heine, Pieter Inpyn, Dirk Jankowsky, A G Jones, Ken Larwood, Nicolas Levy, Derek Longly, Mike Sartin, Bob Scott, Simonwp, Jürgen Stein, Ulrich Streich and Andreas Wörteler for their assistance in compiling this feature.

MV Viking I - Past and Present

MV Lady Rosemary – Past and Present

MV Rhapsody – Past and Present

TS Cote D’Azur (I) – Past and Present

MV AIDAluna – Past and Present

TS Avalon – Past and Present

MV Black Watch – Past and Present