May 4th 1964: Introduced between Southampton – Cherbourg , being registered as CARFERRY VIKING I.

March 1966: Back operating between Southampton – Cherbourg.

December 21st 1966 – February 18th 1967: Chartered to Atlantic Steam Navigation for the Antwerp – Rotterdam route then switched to the Irish Sea and operated seventeen sailings between Preston and Belfast/Larne. She then went to Oslo for the fitting of additional cabin accommodation behind the bridge.

March 1967: Back in service between Southampton – Cherbourg.

🆕 Viking I (Charter to Silja Line)

February 1975: Chartered for a month to Lion Ferry Ab, Halmstad, for use with Prinzen Line services between Hamburg – Harwich. 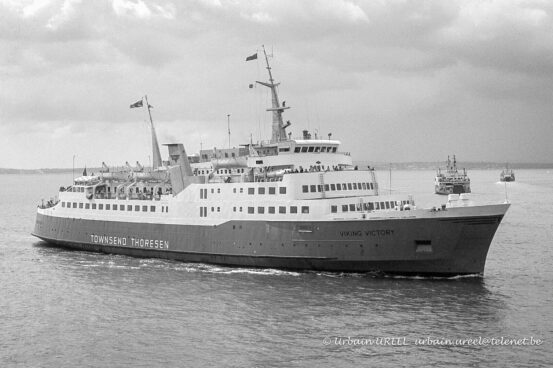 September 1977: Laid up as an accommodation ship in Southampton.

September 13th 1981: Departed Portsmouth for Gothenburg to be laid up for sale.

February 7th 1985: A fire on the SEA NYMPH, which was moored alongside, spread causing minor damage.

2007: Planned services for Ionian Sky Ferries between Brindisi – Corfu – Igoumenitsa did not materialise and she was laid up.

2007: During the autumn she was floated to Eleusis Bay to await scrapping.

May 4th 2008: Having been renamed EDI arrived in Aliaga, Turkey.

May 14th 2008: Beached and scrapping commenced.

All information is believed to be correct and no responsibility is accepted for any errors or omissions found. All items included in this article are subject to © copyright. We would like to take this opportunity of thanking: Brian Fisher, Tony Garner, Frank Heine, John Hendy, Ken Larwood, Aleksi Lindström, Selim San, Urbain Ureel and Andreas Wörteler for their assistance in compiling this feature.

MV Gaelic Ferry - Past and Present

MV Moby Aki – Past and Present

MV Douwent – Past and Present

MV HC Lara – Past and Present

MV St Cecilia – Past and Present

MV Carnival Magic – Past and Present

MV Segovia Carrier – Cargo from the Past