“Built at HDW along with her sister ship SUPERFAST VI. She was the first ship in the third pair of ropax ferries built for Superfast Ferries from various ship yards in Northern Europe. “

February 11th 2010: Arrived in Patras for the final time and then departed for Syros.

January 11th 2015: Operated from Portsmouth to Santander via Brest and completed service before refit.

January 14th 2015: Proceeded to the Astander Shipyard in Santander for a major refit and installation of exhaust gas ‘scrubbers’. As a part of the refit the ships funnel had to be remodelled to accommodate the scrubbers and as a consequence she lost her characteristic superfast ‘wings’. The refit was expected to take 10 weeks.

March 22nd 2015: Departed the Astander Shipyard in Santander and proceeded to Bilbao to resume service. 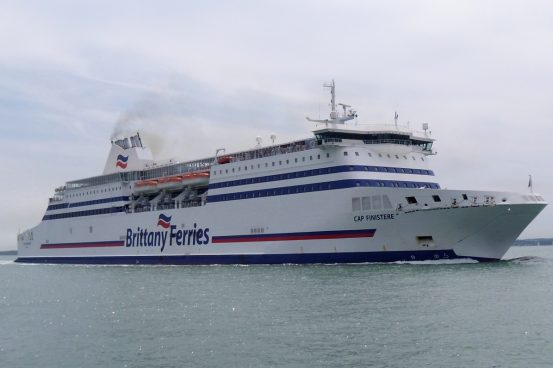 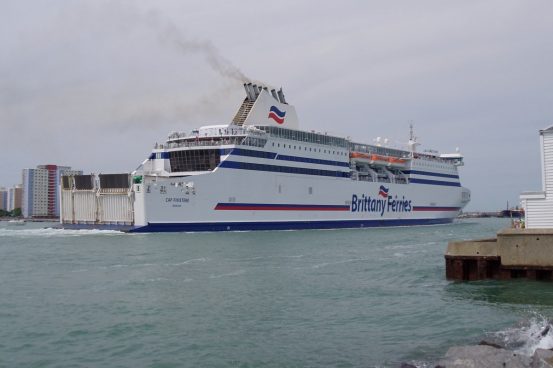 January 2016: Due to cover the Portsmouth-Santander route in place of the PONT AVEN until March.

March 24th 2016: Cap Finistere arrived in Plymouth for a Port State Inspection and operated a one off crossing between Plymouth and Santander.

April 28th 2016: Arrived in Santander for refit at the Astander shipyard.

May 12th 2016: Resumed service between Bilbao/Santander-Portsmouth.

February 12th 2017: Entered dry dock at the Astander shipyard in Santander, Spain for a 5 week overhaul.

November 1st 2021: Came off service at Portsmouth and sailed to Le Havre for lay-up.

January 13th 2022: It was rumoured that the Cap Finistere was to be sold to Grandi Navi Veloci (GNV) for use in the Mediterranean for an estimated €50 million.

Not only the overtaking at the top of the world ranking of shipping carriers for container transport , the 2022 of Gianluigi Aponte has begun with the commitment of shopping also in the ferry sector.

According to SHIPPING ITALY, in fact, the number one of MSC would be completing the purchase of the ro-pax ship Cap Finistere from the shipping company Brittany Ferries for a sum between 45 and 50 million euros. There are no official confirmations at the moment but from Grandi Navi Veloci, the recipient company of the vehicle, there are not even denials. According to some insiders, the deal is already closed, according to others, only details remain to be finalized.

The ship in question is a ferry (formerly Superfast V) built in 2001 at the German shipyard Howaldtswerke-Deutsche Werft in Kiel, has a length of 203.9 meters, width of 25 and a gross tonnage of almost 33.00 tons. She can accommodate up to 1,600 passengers on board, the maximum speed is 26 knots, while the rolling load capacity is equal to 1,908 linear meters. She currently flies the French flag and is operated by Brittany Ferries between the English port of Portsmouth and the Spanish port of Bilbao.If confirmed, this acquisition would represent a further strong signal from Aponte on the desire to strengthen the business carried out by Grandi Navi Veloci and to modernize the fleet. Over the last year and a half the ferry company has received (between purchases and rentals) the arrival of ro-pax Forza, Tenacia, Gnv Aries, Gnv Antares, Gnv Bridge and Gnv Sealand.

The Grandi Navi Veloci fleet rises to 25 units: the GNV Spirit is arriving in Naples

Grandi Navi Veloci has finally announced the arrival of a new ship in their fleet confirming the purchase from the French shipping company Brittany Ferries of the Ca Finisère ferry which now takes the name of GNV SPIRIT. Built in 2001 at the German shipyard Howaldtswerke-Deutsche Werft AG in Kiel in Germany, this modern ro-pax has 32,728 gross tons, 203 meters in length and a cruising speed of 29 knots.

According to what SHIPPING ITALY revealed at the beginning of the year, the purchase price should be close to 50 million euros.

The ship will depart today from the port of Le Havre directed to the shipyards of Nuova Meccanica Navale in Naples, always participated by the MSC Group where the ship will be subject to maintenance activities in view of the upcoming summer season during which it will wear the colors of the Genoese company and will have the GNV logo on the sides.

“The arrival of the new ship is part of the strategies for strengthening the network of routes through the increase of transport capacity on its lines operated by the company in the Mediterranean” explains the company led by Matteo Catani in a note. “The new unit allows for an increase in commercial capacity by 1,926 linear meters and 500 cars”.

GNV Spirit offers large spaces on board and a capacity to accommodate up to 1595 passengers: 265 cabins, lifts on each deck, a relaxation area with swimming pool, 3 on-board bars, a restaurant, a space dedicated to the entertainment of the most small, a shop and an area dedicated to four-legged friends, with services in line with the positioning of the company.

Founded in 1992 and part of the MSC Group (controlled by the Italian holding company Marinvest), Grandi Navi Veloci operates in the cabotage and passenger transport sector in the Mediterranean Sea with a fleet that thus increases to 25 ships operating on 27 lines to and from Sardinia. Sicily, Spain, France, Albania, Tunisia, Morocco and Malta.

All information is believed to be correct and no responsibility is accepted for any errors or omissions. All items included in this article are subject to © copyright. We would like to take this opportunity of thanking: Grandi Navi Veloci (GNV), Shipping Italy, Tim Becker, Pascal Bredel, Trevor Chipperfield, Gary Davies (Maritime Photographic), Robert Fournier, Ben Bartlett, Cristian Gregoretti, Frank Heine, Chris Hunsicker, Manuel Hernández Lafuente,  Prieto, Robert J Smith, The ‘Ferryman’ and Andreas Wörteler for their assistance in producing this feature.

MV Pont-Aven - Past and Present

HSC Stena Pegasus – Past and Present

MV Potomac, Cargo from the Past

MV Pride of Kent – Past and Present

HC Jette-Marit – Past and Present

MV Merchant Victor – Past and Present

MV Summer Wind – Past and Present

MV Saint Colum I – Past and Present

MV Meri – Past and Present