May 11th 1974: Press presentation in Stockholm, followed by Travemünde, Gothenburg and Oslo

May 16th 1974: Commenced service with Sessan Linjen between Gothenburg – Travemünde. 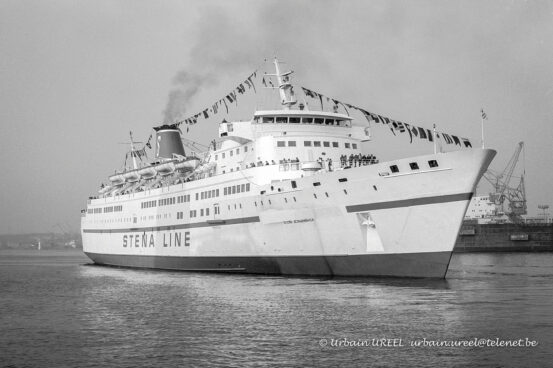 January 31st 1988: The NUS (National Union of Seamen) called a UK national strike in support of the 161 crew sacked by the Isle of Man Steam Packet Company for refusing to accept new terms and conditions. As a result all non-Sealink ships were laid up for three months

June 7th 1988  – September 16th 1988: Chartered to Sealink British Ferries, U.K (reportedly costing £20,000 per day). Commenced service between Dover – Calais, and as a night ferry between Dover – Zeebrugge. The overnight route later closed because of a drain on the finances, with reported losses in excess of £1 million.

King of Scandinavia – © Frank Lose (both)

King of Scandinavia – ©  Andreas Wörteler (both)

1999: Planned charter to Nordic Holland Line for services between Norway and Holland did not materialise.

February 22nd 2002: Chartered to NATO, left Copenhagen for Kalundborg for use in transporting military personnel and equipment between Kalundborg – Szczecin (Poland), then moored in Szczecin as a floating barracks.

April 2002: Taken over by her new owners and renamed CESME.

August 4th 2010: Arrived in Liverpool to be used as an accommodation (hotel) vessel for workers of the Walney Wind Farm

August 2010: Chartered by Siemens and appeared to be used as an accommodation vessel in the Sheringham Shoal offshore wind farm off the UK north Norfolk coast.

February 1st 2012: Due at Ramsgate for berthing trials.

2012: Used as accommodation ship at the London Array wind farm.

February 9th 2019: Sailed to Piraeus and laid up

May 27th 2019: Arrived at Syros (Greece) for scheduled docking and repairs. It is anticipated she will first enter service between Igoumenitsa-Corfu-Brindisi followed by Ancona-Split later on in the year.

May 30th 2019: Chartered for a month to SNAV to replace AURELIA on the Ancona –  Split service.

February 27th 2020: Left Brindisi for Katakolo and laid up.

May 20th 2021: A-Ships Management  indicated the vessel would be scrapped.

August 27th 2021: “The NGO Shipbreaking Platform used the sale of the ‘Princess’ for scrapping as its latest opportunity to call attention to the EU’s failure to enforce restrictions on the sale of toxic ships to the Asian scrapyards. The NGO was calling on Greece to bring the ferry back to Europe for proper disposal and for Bangladesh authorities to reject the ship. According to the NGO, due to the age of the vessel it is likely that it contains large amounts of asbestos. In addition, they highlight the many hazardous materials typically found within the structure of ships and the operational residues after so many years of service.”.

MV Prince Philippe (I) - Past and Present

MV Yeoman Bank – Past and Present

MV Stena Embla – Past and Present

MV Marco Polo – Past and Present

MV Baltic Strait – Cargo from the Past

MV Lady Adele – Past and Present

MV Koningin Wilhelmina – Past and Present

SS Autocarrier (I) – Past and Present