March 13th 1978: Made her “Maiden” voyage to Dover from Ostend, though she was actually brought into service a week earlier on March 7th in order to replace the PRINCE LAURENT, damaged at Dover the month before and still out of action.

July 1984: Sealink UK Ltd had been de-nationalised and purchased by the Bermuda-based Sea Containers the new owners immediately began a general reappraisal of all their services. (including its intention of taking on 50% of all the traffic on the Dover-Ostend route. 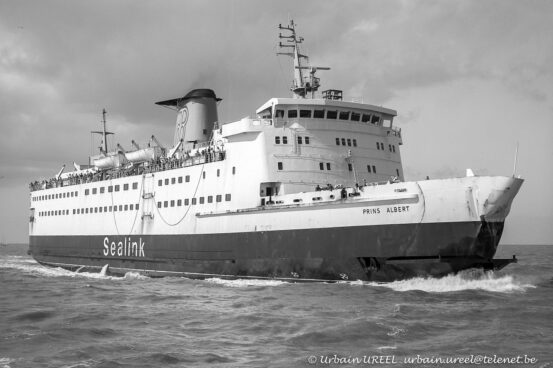 October 25th 1985: Belgians entered into negotiations with Townsend Thoresen and an agreement was concluded.

1985 (Towards the end of): “Grounded, as a result of which her damaged bow was filled with concrete as a temporary measure, in anticipation of her rebuilding”.

1985: The news of a stretching programme, or “jumboisation” as it is often known, was announced, but it only originally planned to deal with the PRINSES MARIA-ESMERALDA and the PRINCESSE MARIE-CHRISTINE, leaving the PRINS ALBERT untouched. By cutting the ships horizontally and inserting an extra lorry deck, their capacity was raised from 46 to 55 pieces of freight. The “PME” had her work completed at the end of May 1985 while the “PMC” re-entered service in January 1986. All work was carried out at Boelwerf Vlaanderen (Boel Yard Flanders) (the former Cockerill Yards at Hoboken). After the failure of a deal to purchase the STENA NAUTICA, involving part exchanging PRINS PHILIPPE and the REINE ASTRID, RMT decided to stretch the PRINS ALBERT and in January 1986 she entered the yard .

Prins Albert – With the kind cooperation of John F Hendy

1987/88 (refit): A completely new livery, reflecting that carried by the P&O European Ferries fleet, was adopted. For the first time in the history of the Dover-Ostend service, the buff (later changed to a lighter shade of yellow) funnels were painted- out in favour of a shade of blue.

1991: The creation of a totally new marketing profile and the adoption of the name with which the line has officially been known since the early days, sees the fleet in its fourth livery in seven years. The first to receive it was the PRINS ALBERT during her overhaul at Ostend in November and December 1990.

1993 (end): It was announced that the Belgian company did not intend to renew its marketing agreement with P&O European Ferries, but instead concluded a deal with Sally Line. With effect from the following January RMT became known simply as “Oostende Lines”, transferring all its Ostend services, including Jetfoil operations from Dover to Sally Line’s base at the Port of Ramsgate.

February 28th 1997: Made her final “Oostende Lines” crossing, withdrawn from service and laid up.

November 21st 1998: The Sally Freight service ended and she immediately began operating for TransEuropa Shipping Lines on the same route.

1999: Seasonal livery of white hull/superstructure with Denval motif on the funnel. 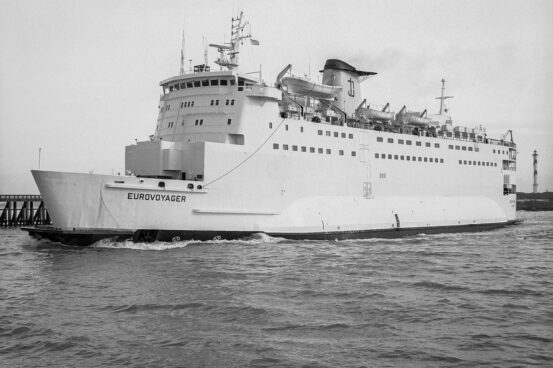 2000: TransEuropa Ferries was applied to the hulls of the EUROVOYAGER and PRIMROSE

September 19th 2004: Following the commencement of passenger services from Ramsgate, re-certified for passenger operation although it is understood she will normally be used as a stand-by vessel in that role.

November 3rd 2008: “A man suffered serious injuries after getting trapped in a watertight door on board a ferry travelling to Kent. The accident happened today at the Port of Ostend in Belgium – but coastguards say the man was not discovered until the TransEuropa ferry was five miles from its destination of Ramsgate. The man, believed to be a Czech ferry worker aged in his fifties, was taken by air ambulance to a London hospital. He was suffering from serious injuries to his chest and neck. Thanet coastguard spokesman Pete Overton said the man was unconscious when paramedics arrived. The crossing between Ostend and Ramsgate usually takes around four hours”.

December 5th 2010: Reportedly taken out of service due to crankshaft problems

April 2012: Reportedly sold to Turkish breakers and sailed from Messina.

TS Holyhead Ferry I - Past and Present

MV Prinses Maria-Esmeralda - Past and Present

MV Aurora – Past and Present

MV Marjan – Cargo from the Past

MV Serenissima – Past and Present

MV Ijzer – Past and Present

MV Maud – Past and Present

MV Ardingly – Cargo from the Past

TS Haslemere – Past and Present

MV Bretagne – Past and Present