Steel twin screw motor vessel, built by Cockerill’s of  Hoboken (Yard No 731) in 1949 for the Belgian Marine Administration’s Ostend service as their first purpose-built car ferry. Engined by Sulzer Bros.,Winterhur.

July 13th 1952: In a second collision with another ship, this time with the ocean going tug ROUMANIA. Entering harbour from Ostend that day, the Belgian boat was caught by high winds and forced beam -to-beam into the tug, with resultant damage to the Channel packet’s port side. 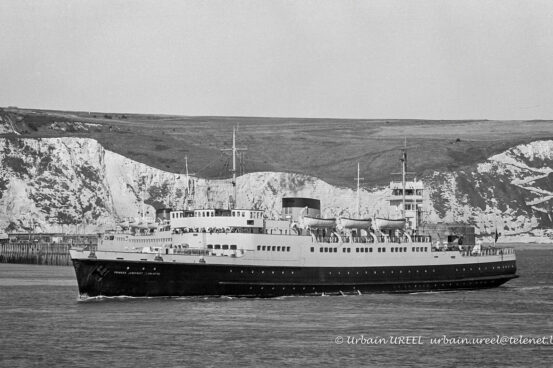 1973: Collided with the breakwater in Dover only causing minor damage

March 15th 1974: She made her last sailing as a normal ferry and was then laid-up in reserve.

1977: Sold to G.Kousouniadis, Piraeus, Greece and renamed ATHENS EXPRESS, running between Greece – Cyprus and Syria with some domestic Greek routes.

June 1984: She was laid-up at Eleusis Bay where she was eventually scrapped.

All information is believed to be correct and no responsibility is accepted for any errors or omissions. All items included in this article are subject to © copyright. We would like to take this opportunity of thanking: Karel Goutsmit, John Hendy, Ted Ingham, Frederik Janssens, A G Jones, John Stedman, Urbain Ureel and Andreas Wörteler for their assistance in producing this feature.

MV Princesse Astrid - Past and Present

MV Pride of Burgundy - Past and Present

MV Diligent – Past and Present

MV Balmoral – Past and Present

MV Translandia – Past and Present

MV Dovorian – Past and Present

MV Norbay – Past and Present

MV Kaitaki (ex Isle of Innisfree (II)) – Past and Present