“Together with the EUROPEAN PATHWAY (Pride of Canterbury) and EUROPEAN HIGHWAY (Pride of Kent) the EUROPEAN SEAWAY were originally built in 1992 as a trio of ”Super European Class” freight vessels for P&O European Ferries Dover-Zeebrugge service. Both the “PATHWAY” and the “HIGHWAY” were rebuilt at Lloyd Werft in Bremerhaven in 2003 (“Project Darwin”) to make them suitable for passenger use on P&O Ferries Dover-Calais service.

December 4th 1991: All time record of freight was carried on the Zeebrugge route, with 1,079 trucks being carried on a single day. On the 20.30 sailing from Dover, the EUROPEAN SEAWAY carried 124 trucks. The previous record was 1,045 vehicles carried on 30th January 1990.

April 2002: P&O announced its intention to buy out the 40% stake in P&O Stena Line owned by Stena Line.

August 2002: P&O Stena alliance ended with P&O purchasing Stena Lines 40% share in the business. All vessels had their Stena house flag removed from their funnels, along with the deletion of the Stena name from their hulls. In future the company would trade as P&O Ferries.

December 15th 2002: Final voyage between Dover – Zeebrügge. In future she operated between Dover and Calais in a freight only capacity.

June 10th 2004: Arrived at A&P Birkenhead. Although the vessel was sale -listed there was some possibility she would return to Dover in 2005 if a suitable buyer had not come forward.

March 12th 2005: Owing to operational problems following the collapse of Calais berth 7 the Seaway operate a number of trips to the Belgian port of Zeebrugge.

December 2006: After Christmas laid up at the Eastern Docks due to a seasonal downturn in freight traffic.

January 2007: Back in service from Dover to Calais.

Late February 2007: Following her refit it was found that there was a major fault with engine number four. She served all Summer on only three engines and she is due to step down from service for repairs in October 2007 when she is replaced by the EUROPEAN ENDEAVOUR (ex Midnight Merchant).

December 29th 2008: After Christmas day lay-up at Cruise Terminal 2, sailed to Portland for underwater video inspection of her hull in lieu of refit.

February 9th 2009: Due to poor underwater visibility at Portland to ARNO, Dunkerque for hull inspection.

June 27th 2009: Off service with damage to her “aft catch leading edge”

16th October 2009: Carried out berthing trials at the new `Hub’ port in Boulogne. P&O denied any rumours that they were going to commence a service to Boulogne and stated that the trials were carried out to ascertain if there vessels could dock in Boulogne in the event of Calais being closed.

August 1st 2010: Due to the peak summer downturn in freight volumes, the European Seaway is put into temporary lay over at anchor for the period 1 – 31 August. The ship is available to cover freight peaks but will not be required to do more than two round trips in any day during the month.

August 10th 2010: The European Seaway was noted to be in service today only having missed a few trips due to her pending “lay up”. The reason stated was that due to the amount of tourist traffic wishing to cross from Dover to Calais she was required to carry freight to free up space on the passenger vessels.

5th September 2010 0800: Carried out berthing trials at the Port of Ramsgate. These were necessary due to the Pride of Burgundy being chartered to Vattenfall to host the official opening of the Thanet wind farm. The Burgundy couldn’t be released from the Dover-Calais service and as the European Seaway shares the same hull form, she was sent instead.

December 24th 2010: Arrived at the Port of Dunkerque and entered the ARNO dry dock, berthing next to the European Trader.

September 5th 2011: It was announced that she would be withdrawn from the Dover-Calais service.

“The European Seaway dedicated freight ship is to be taken off the Dover – Calais service and laid up on 30 September 2011. This commercial decision will help us better match capacity to current levels of freight demand in the Short Sea sector, pending the arrival of the much larger Spirit of France later in the autumn. Affected seafarers will be redeployed to other ships in the Short Sea fleet.”

September 30th 2011: Operates her last crossing from Dover to Calais.

October 1st 2011: Departs Dover for Tilbury, Essex and lay up.

November 16th 2011: Owing to the suspension of Seafrance services from Dover to Calais the “Seaway” is reactivated for a return to Dover to offer additional sailings to Calais.

Onboard the European Seaway

November 17th 2011: Re-entered service between Dover and Calais offering 3 round trips a day. Services reduced at weekends in line with demand.

March 8th 2012:  It was announced that the vessel would be chartered to Centrica Renewable Energy for three to four months.

“Centrica Renewable Energy signed a deal with ferry-operator P&O to adapt one of its vessels into a mothership capable of housing technicians working on North Sea wind farms. The deal, which is a first for P&O, will involve Centrica taking a three-to-four month charter of the 23,000-tonne European Seaway. The ship will be manned by P&O Ferries deck, technical and catering crew providing local hotel services to Centrica staff. It will be anchored seven kilometres off the coast of eastern England whilst technicians undertake operations and maintenance work at the 194 mW Lynn and Inner Dowsing wind farm. The 180-metre vessel was refitted at the Arno Dunkirk shipyard in France.”

April 28th 2012: Left ARNO after additional modifications for her charter.

August 19th 2014: Arrived in Dunkerque. After refit “The European Seaway will be an accommodation ship providing services for up to 150 wind farm technicians working at RWEI’s Offshore Wind farm Nordsee Ost (NSO). The vessel will be anchored 23 nautical miles NNW off Helgoland in the North Sea”.

July 20th 2015: Resumed service between Dover and Calais as a stern loader.

December 19th 2015 (Eve): Stood down from the Dover-Calais service.

December 29th 2017: Sailed from Dunkirk to Calais and resumed service.

April 24th 2019: Arrived Falmouth for refit prior to 3 month relief duties on the Irish Sea.

May 15th 2019: Berthing trials at Larne and Cairnryan.

July 10th 2019: Complteed service with 0400hrs ex Cairnryan and laid up at Larne

July 14th 2019: Departed Larne and headed for Dunkirk and warm lay up.

August 26th 2019: Whilst in dock suffered a generator fire. Damage was severe and required extensive repair.

September 17th 2019: As a “Dead  Ship” towed from the port of Dunkerque by tugs FAROUCHE, VB ADROIT and VB PUISSANT. Tow transferred to FAIRPLAY 33 for onward to Gdansk

September 30th 2020: Announcement made that the vessel would not return to service and her future is unknown.

January 10th 2021: Arrived at Falmouth and proceeded up the River Fal for long term layup. 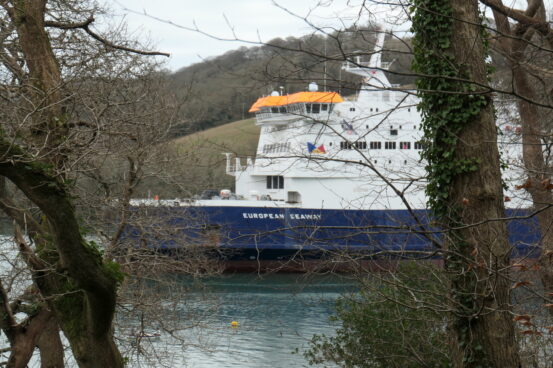 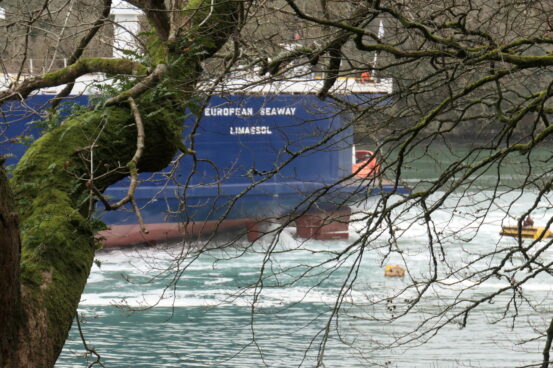 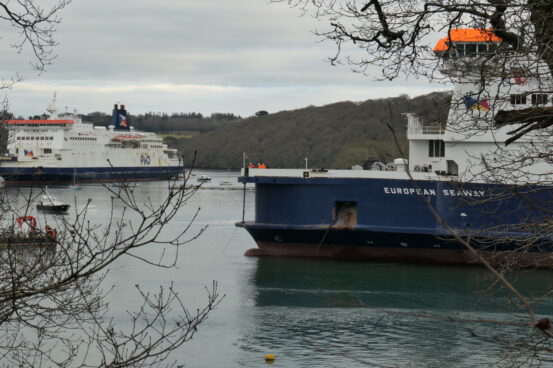 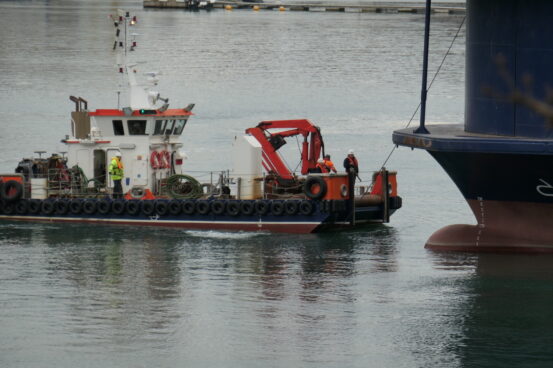 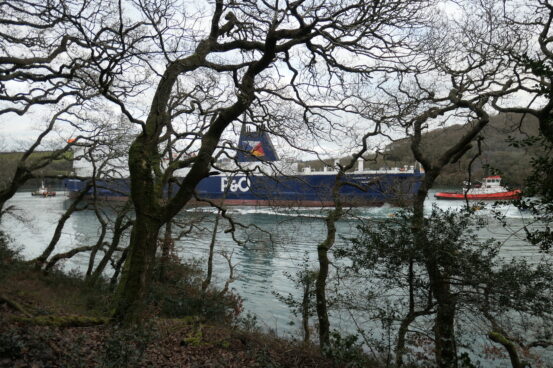 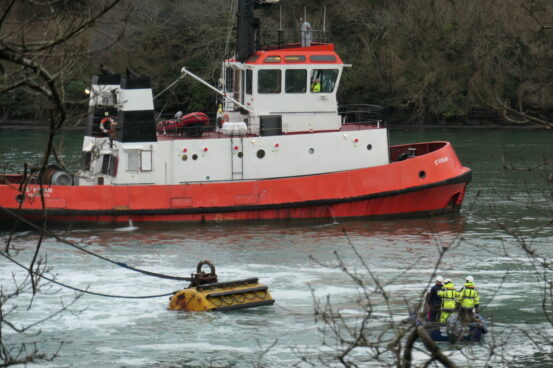 European Seaway – © C. Perrott (Arriving at her mooring on the River Fal)

December 21st 2021: Reports that the vessel has been sold to Sea Lines and will be renamed SEA ANATOLIA. It is, at present, unclear where she will operate. The buyers intend to install a stern ramp and internal ramps that will lead to weather decks.

December 27th 2021: Appeared to have been renamed.

MV St Anselm - Past and Present

HSC Cote d'Argent - Past and Present

MV Morillo – Cargo from the Past

MV Ambition – Past and Present

MV Olau West – Past and Present

MV Henriette, Past and Present

MV Belgia Seaways – Past and Present