Steel twin screw motor vessel, intended primarily as a commercial vehicle ferry, built and engined by Schichau Unterweser A.G., Bremen (Yard No. 2258) in 1975 for the Monarch Steamship Company, like Townsend’s, a subsidiary of the European Ferries Group

“The second of the four “European Class” designed as standard Roll On – Roll Off ships which could be adapted for Townsend Thoresen use.”.

October 27th 1975: PRINCESSE MARIE CHRISTINE suffered extensive damage when fire swept through an area of her engine room. The ship had just left Dover (Admiralty Pier) with 205 passengers, 10 cars and 11 freight vehicles on board when the fire was discovered and she had to put back. A Dover Harbour Board tug and the EUROPEAN TRADER assisted her back to the port while 50 fireman from all over East Kent were called to tackle the blaze. Most damage was caused to one of the ship’s three exhaust systems and although her passenger accommodation was not affected, at one time there was a danger that the fire might spread.

1976 (early): After the opening of a two-tier berth there, also sailed to Calais.

November 16th 1982: Outward bound from Zeebrugge collided with the suction dredger PACIFIQUE. Sustained 7ft gash forward on the starboard side. After discharging at Dover sailed for Flushing and repairs. Back in service within a week.

October 1987: There was a change to P&O European Ferries navy blue hull and funnel.

May 1988: Suffered a control room fire and sent to Bremerhaven for repairs. 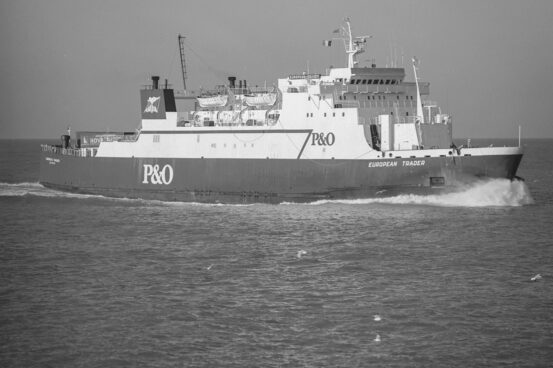 May 2001: Final day operating between Cairnryan – Larne then sailed to Belfast for lay-up.

2002: Rebuilt with added cabins on her upper freight deck.

January 2002: Operates under the name of LINA TRADER.

All information is believed to be correct and no responsibility is accepted for any errors or omissions found. All items included in this article are subject to © copyright. We would like to take this opportunity of thanking: Bernt Anderson, Robert Bertel, Federico Bolognini, Steven Brown, Cees de Bijl, Bernd Crause, Brian Fisher, Alan Geddes, Pieter Inpyn, Trevor Kidd, Ken Larwood, Bob Scott, Alec Sheldon, Simonwp. Robert J Smith, Urbain Ureel, Mark Willis, Michael Woodland and Andreas Wörteler their assistance in producing this feature.

MV Villandry - Past and Present

MV European Gateway - Past and Present

TS Arnhem – Past and Present

GTS Jewel of the Seas – Past and Present

MV Olau West – Past and Present

MV Norbay – Past and Present

MV Amke – Past and Present

MV Gann – Past and Present

MV Carnival Legend – Past and Present